Imagine hitting the high points of Western Europe in just over a week, without feeling rushed or anxious about the pace. You’ll have time to explore… 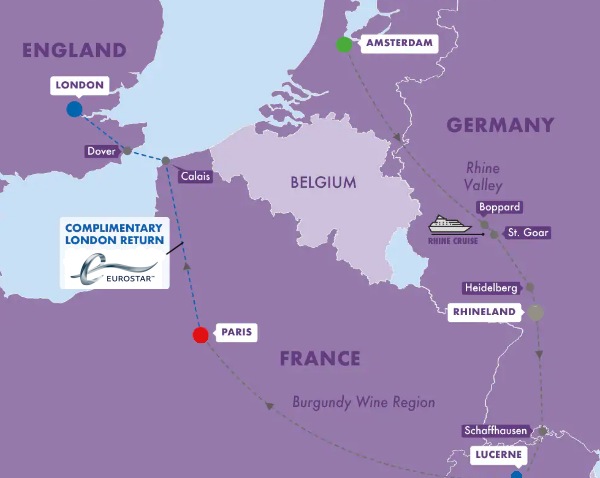 Teplis has partnered with Trafalgar Tours to bring you this roundabout that begins with a canal cruise in Amsterdam, moves through Germany (where you’ll also be cruising down the Rhine) on down to Switzerland, and then around to Paris where you’ll spend two days before heading to London on the Eurostar!

In addition to the planned activities you’ll also have the opportunity to take part in some great optional excursions (extra fee applies) including a visit to the Moulin Rouge cabaret, a Seine river cruise, a cog-wheel train ride to Mount Pilatus or a guided tour of the Palace of Versailles.

Included in your trip are 7 nights accommodations in hand-picked hotels (like the Grand Hotel Europe (pictured at left) in Lucerne or the five-star Pullman La Defense in Paris), 10 meals, all hotel, restaurant and guide gratuities, air-conditioned luxury motor coaches with complimentary wi-fi, audio headsets during tours and VIP admission to sightseeing destinations.

Tours included will visit Amsterdam’s canals, cuckoo-clock making in the Black Forest, the Rhine Falls (the largest waterfall in Europe) a cruise down the Rhine (past Lorelei Rock) and a coach tour of Paris where you’ll see the Champs Élysées, the Arc de Triomphe and the Eiffel Tower.

Knock half-a-dozen items off your bucket list with this grand excursion! Call Susan Rogers in our Vacation Department to book your place now. You can reach Susan at (678) 420-2510 or email her at [email protected]

**Prices given are per person, based on double occupancy and do not include airfare. Monday departures available from April to September, 2020 as long as capacity lasts.