Four Seasons Resort Los Cabos at Costa Palmas is now confirming reservations beginning November 1, 2019 and throughout the holiday period, as well as in early 2020. The contemporary resort seamlessly integrates indoor-outdoor living throughout its 141 guest rooms, including 23 suites, all with views of the Sea of Cortez and private terraces. Airy interiors include sunlit bathrooms, each also touting sea views and free-standing oversized bathtubs. First floor rooms and suites are outfitted with outdoor showers and private plunge pools. 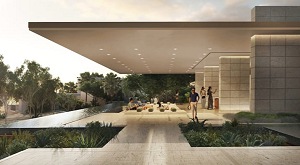 Set against the majestic backdrop of the Sierra de la Laguna Mountains on the East Cape of the Baja California Peninsula, the 1,000-acre resort community of Costa Palmas stretches along two miles of swimmable white sand beach on the shores of the Sea of Cortez. “We are truly breaking new ground here, being part of this community that, while only 45-minutes from Los Cabos International Airport, presents an undiscovered paradise like no other on the Baja Peninsula,” says Vince Parrotta, Four Seasons President, Hotel Operations – Americas West.

The Resort’s culinary team will be led by rising-star Chef Tonatiuh Cuevas, who most recently introduced the celebrated Nayarit-inspired restaurant Zanaya at Four Seasons Hotel Mexico City. Each of the Resort’s additional dining options deliver an authentic epicurean journey into Mexico’s bountiful land and seascapes, including Casa de Brasa, a Baja-inspired brasserie; El Puesto, for sea-to-table ceviches, tiraditos and crudo; The Cove, an al fresco bar and grill; and Ginger’s, an all-day eclectic café. An extensive collection of local tequilas and mezcals complement the food and beverage program, as well as an impressive list of Greek, French and regional wines from Baja Mexico – the oldest wine-producing nation in the Americas.

Upon landing at the Los Cabos International Airport, the Cabo crowds typically turn right, heading to the tourist corridor. Guests of Four Seasons Resort Los Cabos at Costa Palmas will turn left, embarking on a 45-minute drive through wide-open desert and sky before reaching the private and exclusive East Cape of the Baja Peninsula.

Once a haven of adventure and escape for Hollywood celebrities and Texas fishermen arriving by small plane or chartered boat in the 1950s, the vast landscape of the East Cape has remained virtually untouched, until now.

The East Cape sits along the Sea of Cortez, a UNESCO Marine Heritage site called “the aquarium of the world” by famed oceanographer Jacques Cousteau for its population of nearly 900 species of fish and plant life. Also known as the Gulf of California, the Sea of Cortez provides a wealth of inspiration to chefs and sport fisherman alike. Its calm, warm waters are also ideal for pleasure craft, diving, snorkeling, water sports and swimming.

The region also offers endless opportunities for land adventure, from desert ATV adventures, hiking, biking and horseback riding to exploring waterfalls and hot springs – all within minutes of the Resort. It’s just a half-hour drive to the quaint community of Santiago. Take a short hike and go for swim beneath a waterfall pouring off granite cliffs. Or head to El Triunfo, a 19th-century mining town where several old buildings have been restored and converted to restaurants, boutiques, art galleries and a museum.