Holiday Inn, the iconic hotel chain that introduced the concept of the roadside inn to America, is trying to reinvent itself for a new generation of travelers.  The hotel company, owned by InterContinental Hotels Group, once the dominant player in the midpriced market, faces stiff competition from chains such as Courtyard by Marriott. 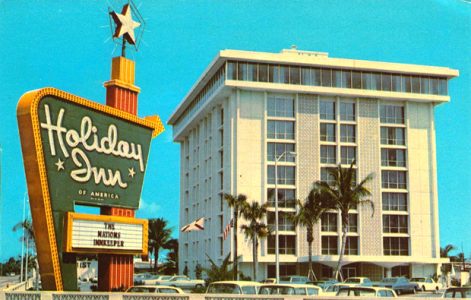 In 2007, IHG launched a three-year, $1 billion overhaul of the 61-year-old brand, whose large green signs became one of the most recognizable sights on major roads. The rebranding included a complete makeover and the closing of underperforming hotels. But the makeover went unnoticed by many travelers. “We know it’s a perception challenge, quite honestly,” says Heather Balsley, senior vice president of the Americas Holiday Inn Brand Family. “It’s changing the perception of what Holiday Inn is today vs. the Holiday Inn (travelers) experienced 10 to 15 years ago. It’s also about attracting that younger generation.” The new campaign highlights renovations such as open public spaces that encourage social interaction, a modern fitness center, communal tables and better food and beverage options. Balsley says the company is testing out new concepts for the lobby and will continue to invest in new food and beverage offerings and staff training. (USA Today)